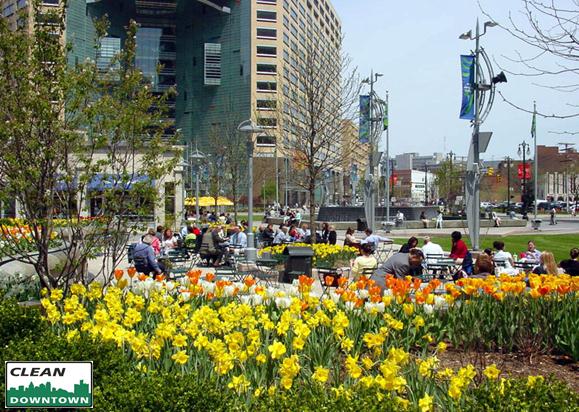 Recently the landscaping crew truck used in these Downtown beautification efforts was donated to Clean Downtown by Torre and Bruglio, Inc, one of the state’s largest horticultural and landscaping contractors whose landmark projects include the Penske Corporation and Chrysler World Headquarters, Detroit Tigers at Comerica Park, and the Detroit Zoo.  Frank Torre, a Michigan entrepreneur, businessman, and philanthropist is CEO and chairman of both Torre & Bruglio, Inc, and Signal Restoration Services, a full-service contractor that specializes in property loss mitigation and has restored properties in Michigan and across the country.  Headquartered in Troy Michigan, some of the company’s high-profile projects include three major hospitals in Brooklyn, Manhattan, and Roosevelt Island in the aftermath of Hurricane Sandy in October 2012.

The donated equipment has been loaned for the last several years by Torre and Bruglio, Inc., and in addition to being used to help clean Detroit, is being used by Clean Downtown and Goodwill Industries of Greater Detroit to train workers in landscape management while helping make Downtown Detroit a more beautiful place to live, work and play.

The president of the Downtown Detroit Partnership, which administers Clean Downtown, has been quoted as saying that “Keeping Downtown looking its best is a team sport and we’ve had the best team working with…. Torre and Bruglio, Inc ….. in our efforts to keep Downtown Detroit looking cleaner and greener while helping workers obtain valuable job skills.”

The landscaping crew truck is a welcome and permanent addition to the Clean Downtown fleet of trucks seen in and around Downtown Detroit keeping things picked up and clean. It provides much needed transportation to the workers in the Goodwill landscape management program.  This collaborative effort has resulted in newly trained workers and the lovely landscaping that has made Downtown’s landscape pop with color and green ways.

In addition to providing the truck, Torre and Bruglio, Inc. has generously shared its vast expertise and helped train workers by giving them a much needed and valued skills set.

“The company of Torre and Bruglio, Inc., led by Frank Torre, …… has played a significant role in helping Detroit’s disadvantaged find their way back into employment and personal dignity,” said Goodwill Industries of Greater Detroit Vice President Lindsay Chalmers.  “They have for many years partnered with Goodwill to assist with teaching of new skill sets surrounding landscape maintenance and the gift of this truck is but one more example of their level of caring.”